The Made in Italy victory

abanoritz12 July 2020Comments Off on The Made in Italy victory

“To eat is a necessity, but to eat intelligently is an art.”

Ham goes down in history, but not just any ham, but the Italian one; right, but today we are not talking about any Italian ham: we are talking about the Montagnana ham.

Montagnana is a town, in the city of Padova, very active in the Middle Ages, but already with the first settlements in the fourth century B.C. recognized by archaeological finds. Among the cities of Veneto, Montagnana is certainly one of those that have been better able to preserve the city walls, still admirable today as in the fourteenth century, without too much tampering. In 2003, the Italian Touring Club awarded this city the “Orange Flag” quality mark, followed in 2014 by the one of the “most beautiful villages in Italy”. In addition to being picturesque, it is also a place where the succession of generations has left an original and enterprising imprint.

From the late Neolithic age, through the Bronze and Iron Ages, we arrive at the Roman era documented by various rustic villas and tombs as well as by magnificent glass pottery. It was the ancient Romans who carried out the first reclamation of the area with interventions on the embankment of the Adige diverting the course further south. Given the elevated position of the walls, compared to the surrounding countryside, it was certainly a strategic point in the Middle Ages, especially against the Hungarian invasion.

But going back to the nowadays, Montagnana today certainly lives, as well as of tourism, of a particularly specialized agriculture, but it is also known for the traditional breeding. Among its most important products, we definitely have the sweet ham of Montagnana “Veneto Berico-Euganeo” PDO. 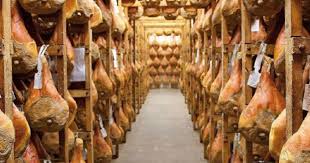 The Made in Italy today has finally obtained the recognition of the European Union according to which the label will finally certify the origin of the sausages. In fact, unfortunately, many of the products sold as Italian ones, are actually obtained from foreign meats: we talk about of almost three-quarters of the meat in the national market, without thinking about the international one.

The announcement of this goal is given by Coldiretti Padova, which specifies above all the importance of this step for the Veneto region, where it is concentrated the 7% of the national production having as fulcrum the mountainous and expanding to the foothills.

Montagnana is only 45 kilometers from the AbanoRitz Hotel and many more are the wonders of the territory to discover, the food and wine experiences that our staff is ready to advise you and propose you, the excursions to report you. We wait for you from the 13th of August, our reopening date, for what it will be a safe, relaxing and positively different holiday.

Euganean Hills have the scent of Joy Next post