MONTIRONE, the cradle of the thermae of Abano

abanoritz12 July 2019Comments Off on MONTIRONE, the cradle of the thermae of Abano

“When it comes to fight for your dreams, be a dragon. Breathe fire.”

The Sources of the Montirone, Mons Ieronis. Abano Terme, mentioned in the old documents with the Latin term Aponus, is since always known for its miraculous hot springs. The name derives from the latin ap, water, even if some literaly soruces make a translation from the greek a-ponos, that is something “that takes out the pain”.

The Montirone is one of the most important testament of the hot spring of Abano with its five baths and its sources. The old citizens of the area used to come here to perform rituals about the health recovery since already the VIII century BC. Archeological discoveries attest the presence of a temple dedicated to the god Aponus since almost the I century AC, in addition to a vase emporium destined to provide visitors in order to drink the therapeutic water. These are the first traces, which go on in the history up to the present day.

A majestic entry holds a green hill and these old sources rich in magic and mystery. The entrance arcade has been designed in 1825 by one of the major exponents of the neoclassical style in Veneto: Giuseppe Jappelli. And that’s right one these columns to appear in the Abano Terme’s emblem, in the clutches of Gerione, the mythical winged dragon, heraldic symbol of surveillance, custody and fidelity. 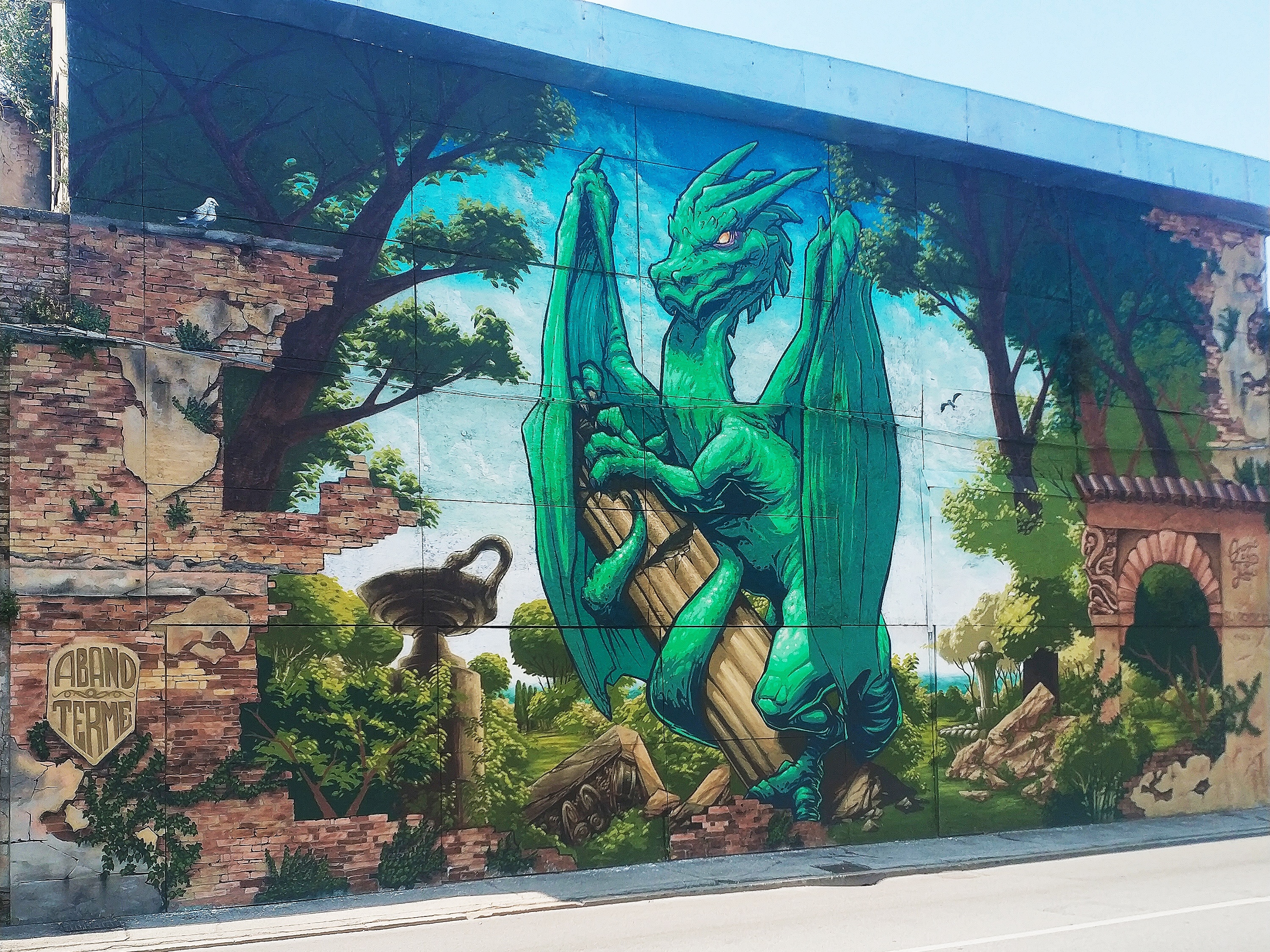 This same winged dragon is the subject of one of the works imagined and created during Super Walls – Festival Biennale della Street Art by the over Alps crew Le Cremerie. This mural, in front of the Duomo of Saint Lorenzo in Abano Terme, paints Gerione surrounded by the nature of Euganeans Hills, by the hot springs and by the thermal water. Not so far there other works, as two brown and blue masks (mud and water) next to cinema-theater Marconi: symbol of the theatre itself and of the Sartori family, masters of the masks to whom we should thank for the International Museum of the Mask. There are also few works by Alessio-b that we know for painting for us a piece with his famous Monalisa in smocking destinated to our room 510-Recycling. All the works have been made with Airlite paint which purify the air.

The Park Montirone has also inaugurated on Wednesday the 10th of July the festival “Cinema in Giardino” organizing five unmissable projections in the Park Montirone itself, under the stars and between the thermal smokes.

All this and much more is easily joinable in few minutes from our hotel. Do not miss the possibility to relive the art, the history and the culture of the most famous thermal springs in Europe choosing between our assorted stay promotions.