The May concert: three women in music at AbanoRITZ

Il Sito delle Donne17 April 2018Comments Off on The May concert: three women in music at AbanoRITZ 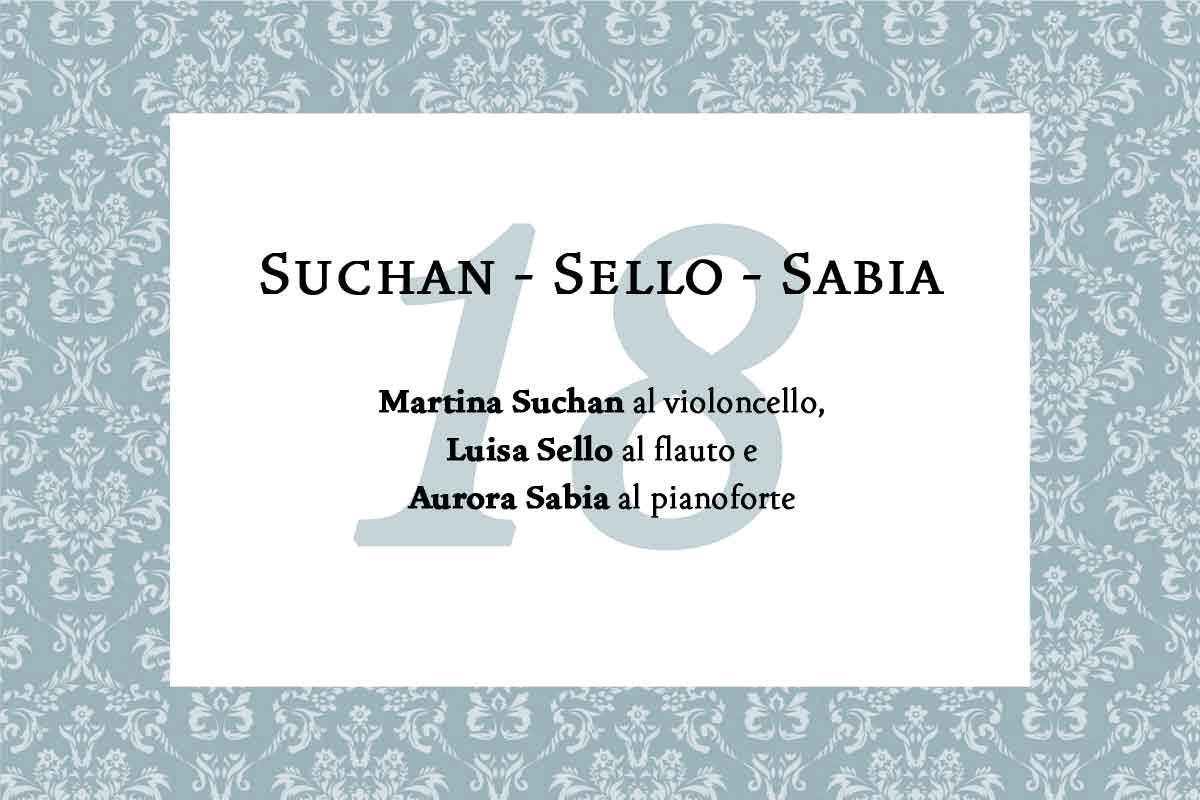 On May 18 at 9.15 pm, the next appointment with the concerts in Sala degli Specchi, the beautiful Venetian-style hall of AbanoRITZ, organized by the Klyo Music Association. The concert belongs to the rich program of The Colors of Music in the World festival.

We will have the pleasure to welcome three women musicians of commendable skill that will create with mastery a unique and fascinating atmosphere, with Martina Suchan on cello, Luisa Sello on flute and Aurora Sabia on piano.

We are lucky to be able to unveil preview some interesting about the pieces that will be performed during the concert.

MARTINA SUCHAN, welcomed at the age of 14 in the class of André Navarra, at Detmold in Germany, completes her academic studies and perfects herself with Heinrich Schiff, Daniel Shafran and Janos Starker. The first prize at the “Gaspar Cassadò” International Competition in Florence opens her international career. She has performed as a soloist with renowned orchestras including the Bamberger Symphony Orchestra, the Tokyo Metropolitan Orchestra, the Orchester de la Suisse Romande and the Zurich Tonhalle Orchestra alongside artists such as Yuri Bashmet, Shlomo Mintz, Veronika Hagen and Heinz Holliger. Guest of important festivals such as the Lucerne Festival, “Wien modern”, Witten, Montpellier, Prussia Cove, is currently a lecturer at the University of the Arts in Zurich and a member of the Collegium Novum Zürich.

LUISA SELLO, defined by the New York Concert Review artist by the ‘compelling passion and spontaneous cantabile, with brilliant technique, excellent breath control, generous sound and great charm’ plays all over the world and is an artist chosen by the Italian Ministry of Cultural Heritage to represent Italian music. Her curriculum includes the names of Riccardo Muti, Trevor Pinnock, Alirio Diaz, Wiener Symphoniker, Carnegie Hall, Juilliard School, Philippe Entremont, Thailand Symphony Orchestra, Teatro alla Scala in Milan, Salvatore Sciarrino, Bruno Canino. Student of Raymond Guiot in Paris and Severino Gazzelloni at the Accademia Chigiana of Siena, with academic studies in Flute and in Modern Languages and Literatures (Degree and PhD), she is professor of the flute at the Conservatory of Trieste and guest professor at the University of Vienna. A testimonial artist of Miyazawa Flute, she recorded for Stradivarius and Millennium in Beijing.

AURORA SABIA. She graduated at the Trieste Conservatory with Prof. Trevisan, and perfected her studies with G. Nador, S. Young, J. Von Vintschger, J. Kropfitsch, P. Lassmann, P. Bordoni, S. Gadjiev, K. Eickhorst, B Lupo, K. Barth, A. Léger, R. Clini. Winner of the Ananian Foundation prize, she followed her studies of high piano perfection with Maestro A. Delle Vigne at the Schola Cantorum in Paris. She then worked as a piano accompanist in France, at the “Conservatoire Régional” in Rennes and in Turkey, at the “Yaşar University” in Smyrna. Performs concert activity, both as a soloist and as a chamber musician. She has played alongside artists such as Susan Hoeppner, Carol Wincenc, Derek Jones, Han Guoliang, Anton Niculescu, Bruno Canino, Martina Suchan.